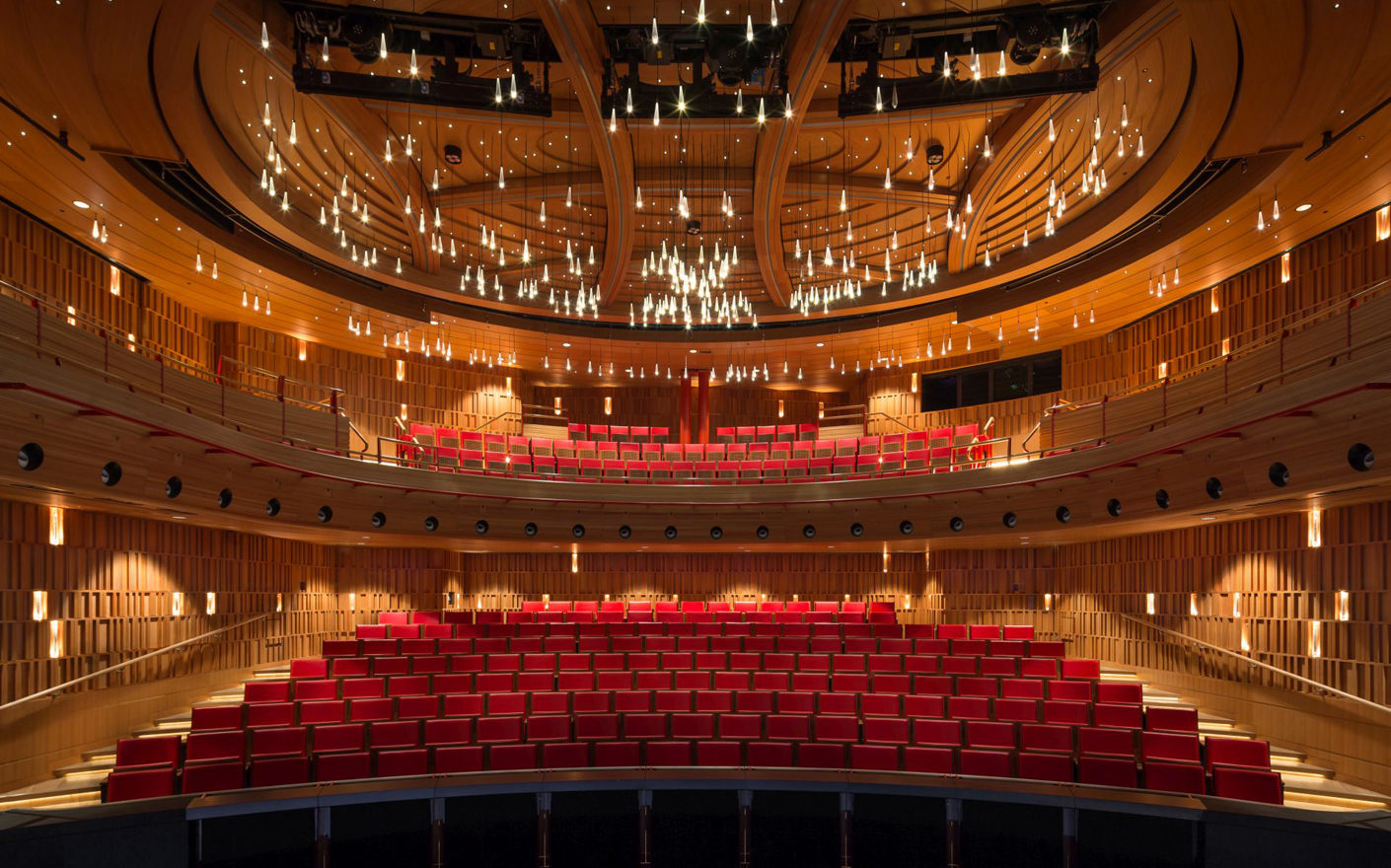 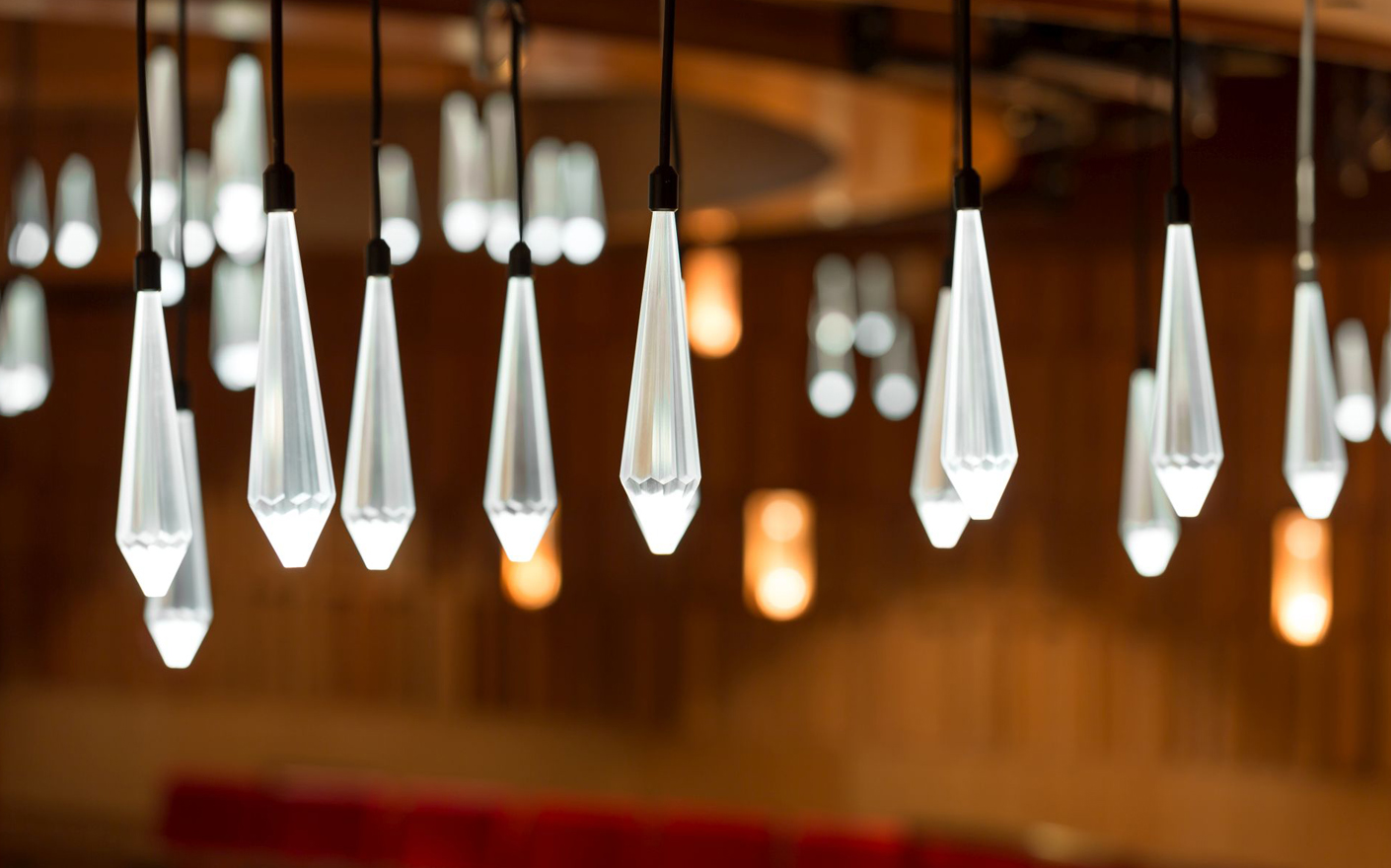 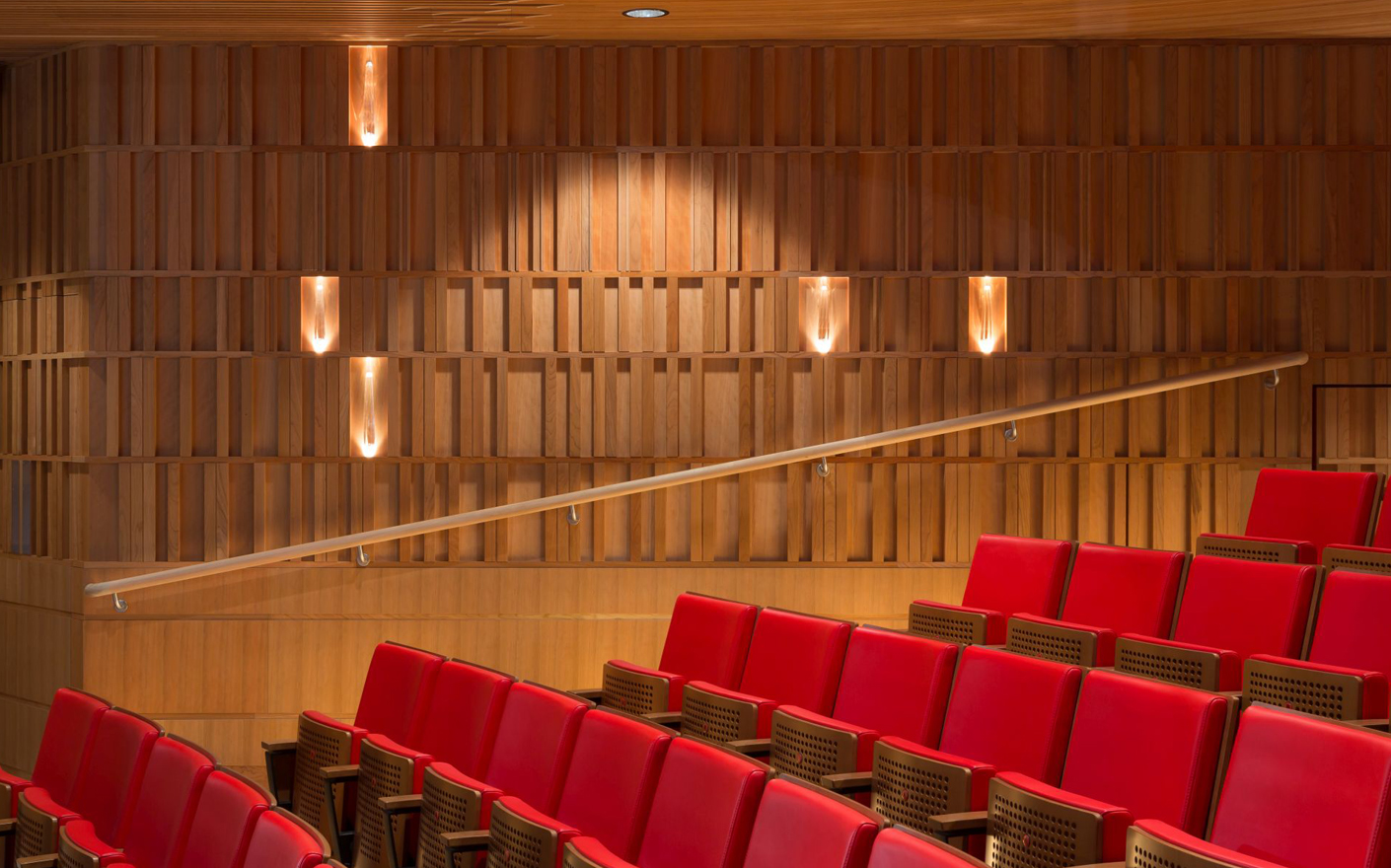 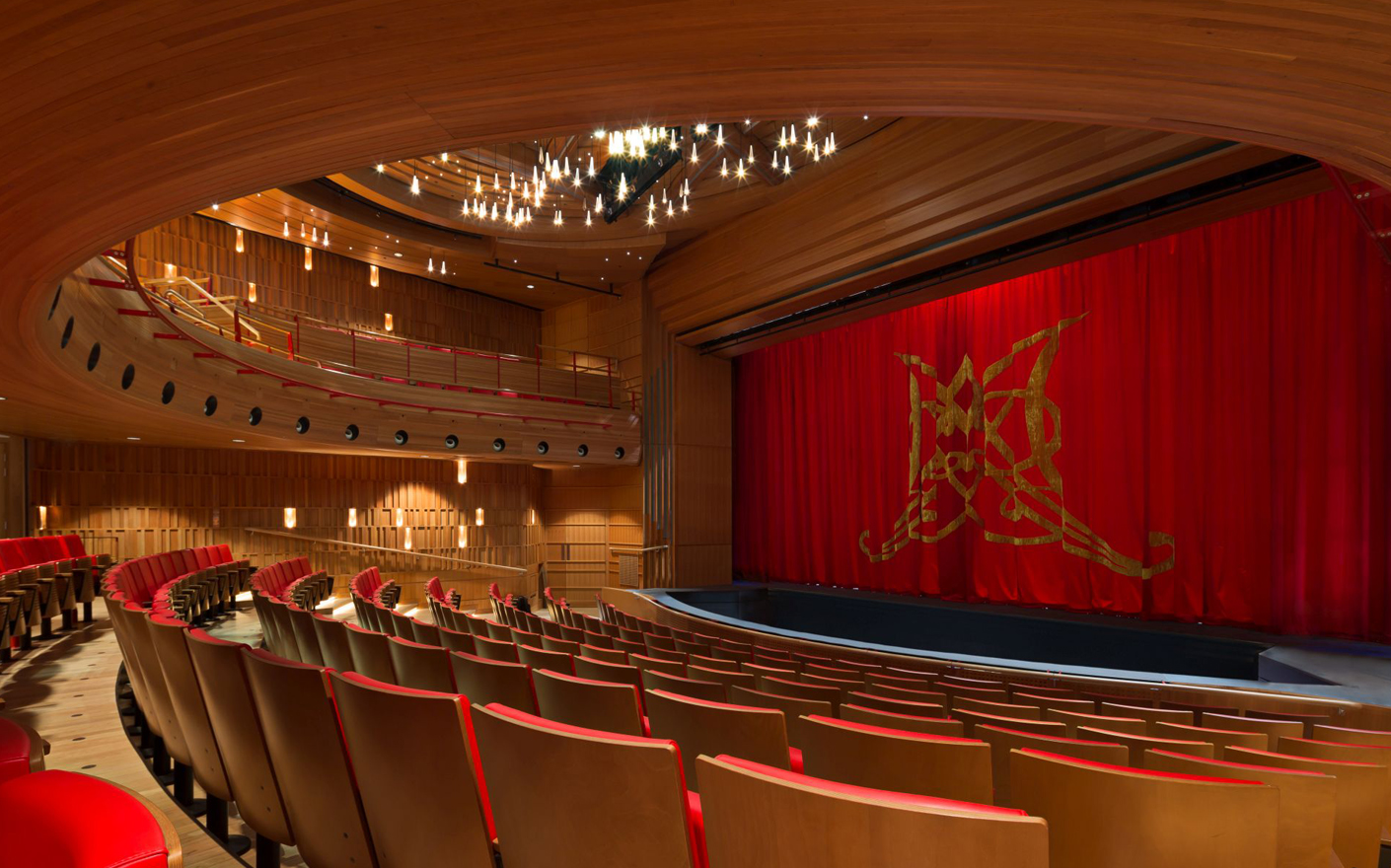 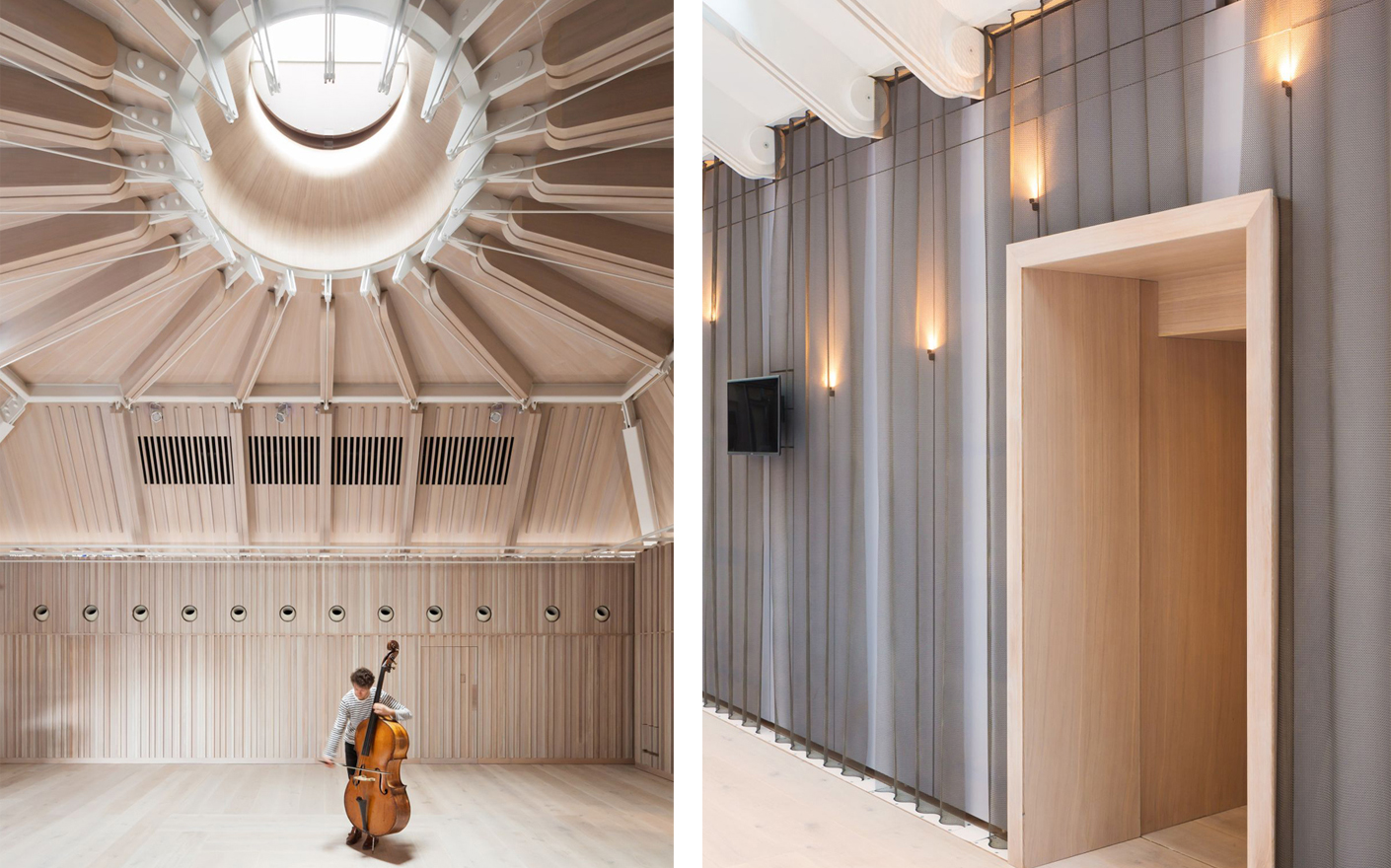 The new building for the Royal Academy of Music houses the Susie Sainsbury Theatre for Opera and Musical, the Angela Burgess Recital Hall (studio stage) with its own recording studio, a lobby, the access staircase and technical rooms. In the former courtyard of the historic building, the new building serves two functions: It is a place for public performances of operas and musicals, for studying and learning. The light creates the atmosphere for festive occasions and spreads an inspiring, fresh character for practice situations. The Susie Sainsbury Theatre’s cherry wood ceiling and walls are reminiscent of the sound bodies of stringed instruments. Unlike the traditional centrally placed chandelier, our chandelier has exploded, the 750 crystals filling the entire space from ceiling to walls. Just as the music spreads and disperses throughout the room, so do the crystals of the chandelier.

This follows the principle that a homely feeling is created when there are not only high but also low points of light related to people, and the brilliance creates the festive atmosphere.

Since the luminaires under the ceiling would be difficult to reach for maintenance above the fixed pews, we chose fibre optic technology. The fibre optic cables that feed the light into the crystals are located in three technical rooms outside the theatre.

The small light points in the ceiling level also get their light from these projectors. Together with the downlights under the balconies, we thus achieve 150 lux at the entrance to the hall.

The custom-made wall crystals, 20cm, 30cm and 40cm high, are housed in the “niches” of the acoustically structured wall and receive their light from LEDs from below. In the wall luminaires in the stairwell in front of the Recital Hall, the principle of low light points reappears: as atmospheric light cones behind a metal fabric curtain.

The round skylight determines the lighting concept of the Recital Hall: the line between wall and ceiling functions as a horizon line. All the other spotlights are seen as stage spotlights that also produce the ambient light. Adjustable and with different optics, there is a variable light (varying in its uniformity) that is not too uniform.
The Royal Academy of Music, London project is characterised not least by the particularly good, cooperative and respectful collaboration with Ian Ritchie Architects and all trades.